HOUSTON – Not long ago, when the Houston Astros were in the midst of losing more than 105 games in three consecutive seasons, when their local TV ratings were literally 0.0, when they were tanking to win before it was cool, they believed this day would arrive. Certainly they hoped the path would come easier than this, a seven-game torture rack of an American League Championship Series against the New York Yankees that stretched them to their limits. That was fine. They had lived through worse. 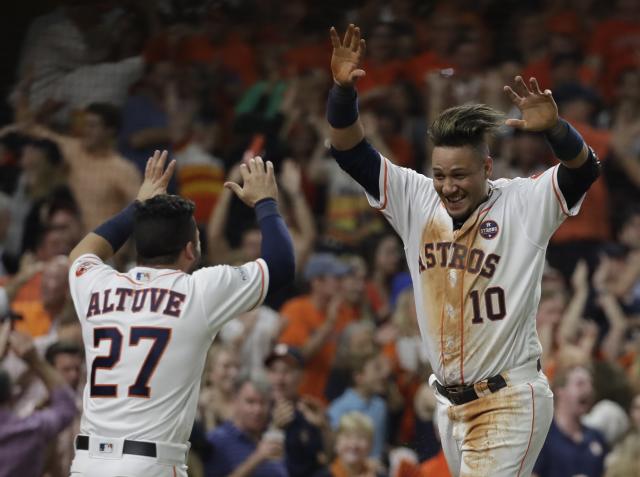 The losing, the rebuilding, the devastation dealt to this city by Hurricane Harvey – all of it made their 4-0 victory Saturday night to advance to the World Series that much more special, that much more resonant. The home team won all seven games of the series, and in front of 43,201 orange-clad rowdies at Minute Maid Park, the Astros outpitched, outhit and altogether outplayed the Yankees to win their second consecutive elimination game.

Houston will face the Los Angeles Dodgers in the World Series, with Dallas Keuchel set to oppose Clayton Kershaw in Game 1 on Tuesday at 8:10 p.m. ET. The Yankees will head home heartened by an advance deep into the playoffs a year ahead of their expected resurgence but disappointed by the missed opportunities to close out Houston in Games 6 and 7.

Fantastic though the Astros’ pitching was in the clincher, with starter Charlie Morton spinning five shutout innings and starter-playing-reliever Lance McCullers Jr. blanking the Yankees over the last four, the game hinged on a perfect play at the plate and turned for good when the catcher who made it came through with the bat, too.

That the Yankees are paying part of Brian McCann’s salary for the Astros this year was only rubbing alcohol in the deep cuts he inflicted on New York. The first came in the fifth inning, with Morton wobbling and the Yankees threatening following an Evan Gattis home run that had staked Houston a 1-0 lead. With Greg Bird on third, Todd Frazier dribbled a ball to the left side. Alex Bregman wheeled toward home with what looked like an ill-advised throw, but he feathered it in to the perfect spot, where McCann scooped it and held a tag on Bird, whose spike dug into McCann’s forearm. He was out. Morton escaped.

In the bottom of the fifth, Jose Altuve, the heart of this Astros team, who played on the 106-loss team of 2011, the 107-loss team of 2012 and the 111-loss team of 2013, homered off Tommy Kahnle, who had relieved Yankees starter CC Sabathia after 3 1/3 innings. Carlos Correa and Yuli Gurriel singled, putting runners on first and third for McCann.

The Yankees had dealt him to Houston in the offseason, a time in which the Astros prioritized adding to their phenomenal young core with veterans. In Altuve, they had an MVP-type player – and he is the favorite to win the award this year. In Correa, they had turned the No. 1 overall draft pick into among the most talented young shortstops in the last two decades. In Keuchel and McCullers, they had a pair of homegrown pitchers with frontline stuff. McCann, 33, would be a complementary piece.

He found himself center stage in Game 7, crushing a Kahnle changeup into the right-field corner. Correa scored easily. Gurriel, for years the best player in Cuba, a late defector because of his family’s close relationship with top governmental figures, raced around third and slid headfirst into home. It was 4-0.

The Yankees had escaped a similar deficit four days earlier, when they scored six unanswered off the Astros’ beleaguered bullpen. Hinch didn’t bother going to it in Game 7. If Morton’s five shutout innings were the appetizer, McCullers’ four were the main course, and the Astros were happy to eschew dessert. In the ninth, he retired Didi Gregorius, Gary Sanchez and Bird to secure the save and the AL pennant.

And with that, the plan of Jeff Luhnow, the Astros’ general manager, had come full course. He took over following the 106-loss season and refashioned the Astros, an antiquated organization, into a finely tuned machine of analytical excellence. There was nothing the Astros wouldn’t study, no traditional thought they wouldn’t test just to see if it was wrong. They were The Process before The Process.

They made mistakes along the way, whiffing on draft picks and rankling some across the game with their unorthodoxy, but their willingness to adapt – and make against-type moves, like the acquisition of the vital Justin Verlander on the Aug. 31 trade deadline – buoyed them. And now they’re headed to the World Series to try and win the first championship in franchise history, ready to take on a Dodgers team that hasn’t won since 1988 but ran roughshod through the National League, making mincemeat of the Arizona Diamondbacks and Chicago Cubs along the way.

The Astros’ road was tougher. They wouldn’t have it any other way.