LOS ANGELES — The Houston Astros are all alone in the baseball stratosphere, coming through just when their city needed them most.

Just a little more than two months ago, the Astros were displaced, disconsolate and helpless, grieving that they could not do more for a city ravaged by Hurricane Harvey and its aftermath. All the Astros could do then was play baseball, to give their fans common cause and a little distraction. All they can do now is revel in the first World Series title in the history of both the city and the state. It seems like so much.

“Our team believed in each other all year,” World Series MVP George Springer said. “And through the good times and the bad times, through a rough stretch in August, to getting down 3-2 against a very good New York team [in the American League Championship Series], there’s a lot of things that happened. I’m so happy to be a part of it to bring a championship back to a city that desperately needed one. It is a surreal feeling.”

In one of the most dramatic World Series ever, the Astros sucked the air out of Dodger Stadium from the outset. They jumped on Los Angeles Dodgers starter Yu Darvish for five early runs and then cruised to a 5-1 clincher on Wednesday, the first World Series Game 7 at Dodger Stadium.

As he has done so many times during his spectacular young career, Springer sparked it all, leading off the game with a double and scoring on Cody Bellinger’s throwing error. Then he broke the game open in the second inning with a cometlike homer to left-center that gave Houston a five-run lead. No team had ever overcome a deficit that large in a winner-take-all World Series game. Lance McCullers Jr. and the bullpen — led by a heroic four-inning effort from Charlie Morton to finish the game — made sure that stat remained in effect.

“When the stage got big and the anxiousness started, you just rely on your guys,” Astros manager A.J. Hinch said. “George, as [the leadoff hitter], when he goes, we all go. And I think that was seen the rest of the Series; when he got going, it gets pretty scary. He can do a ton of damage. He’s at the top of the lineup for a reason.” 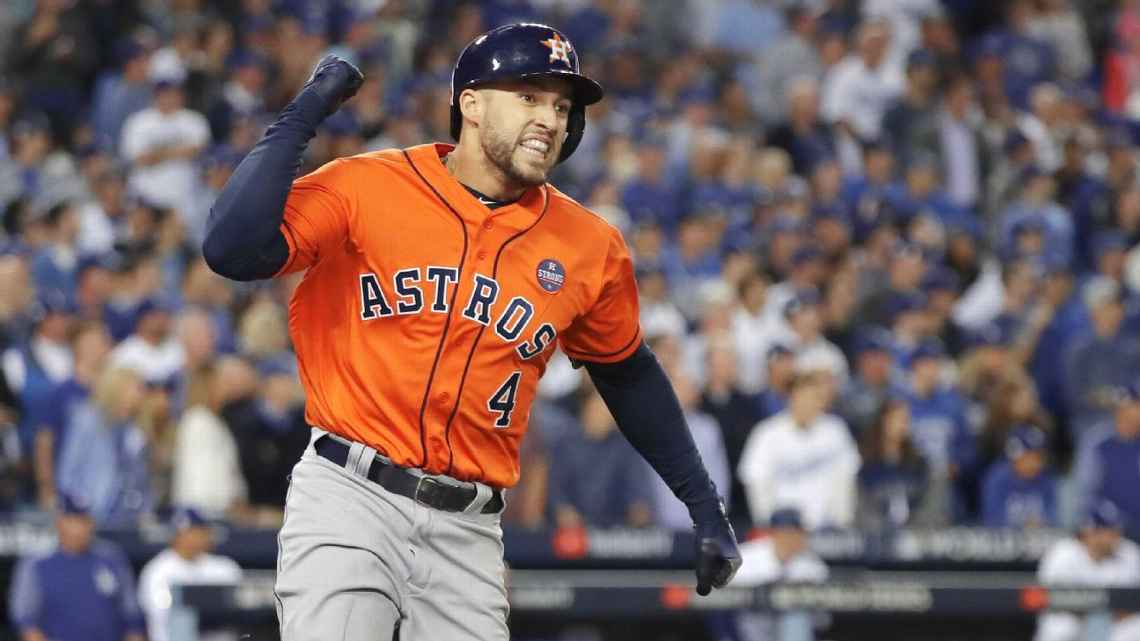 Springer became the first player with homers in four straight games in one World Series. He tied Reggie Jackson (1977) and current Dodgers second baseman Chase Utley (2009) with five homers in one Fall Classic. He also set a new World Series mark with 29 total bases. All this after his rough start in the Series led to some in the media worrying if his swing had gone wrong.

Clearly not. After the game, Springer was crowned World Series MVP — an award now named after Willie Mays, another center fielder, whom Springer used to imitate.

“I used to go in the backyard with my dad and he would hit me fly balls and I’d pretend to be him,” Springer said. “I would pretend to be Willie Mays. And to earn this is great. It’s an honor. But it’s not about me. It’s about the team and what the team has done tonight.”

Almost all the young Astros’ stars contributed to their historic win. Alex Bregman scored a run and made a couple of nifty defensive plays. Jose Altuve drove in a run on a groundout. McCullers pitched around some early command troubles — he hit a postseason record four batters — and drove in a run at the plate. Carlos Correa singled off of Clayton Kershaw.

Thus completes the rapid rise of a franchise only three years removed from the third of three straight 100-loss seasons, one of the worst trios of campaigns any franchise has ever had. Houston becomes the fourth team to go from 100 losses to a title within five seasons, joining last year’s Chicago Cubs.

But with the losses came draft picks, international signings, upgraded developmental processes — all conducted under the cutting-edge baseball operations machine headed up by general manager Jeff Luhnow and put into action under Hinch.

But suffice to say, the Astros are all grown up.

The Lone Star State has its first World Series champion, as the Astros climb to the top of the baseball world for the first time in their 56 years of existence. When you add in the Texas Rangers’ 46 years without a title, the combined drought was even longer than the one the Cubs broke last season. But in the end, the Astros got there before the Rangers, and in a spirited intrastate rivalry, that means a lot too.

The folks in Houston continue to deal with the aftermath of Hurricane Harvey, which devastated parts of the city and surrounding areas with record flooding at the end of August. They’ll be dealing with it for a long time to come. The storm forced the Astros to relocate a three-game series against the Rangers to Tropicana Field in St. Petersburg, Florida. The players, some with families stranded by the catastrophe, struggled to focus on the games at hand and let it be known they wanted to get home as soon possible to do what they could to help the community.

“I’ll tell a quick story about Jose, who was separated from his family. A lot of guys, a lot of our families, some were with us, some weren’t,” Hinch said. “Jose came up to me and asked how long he would have to play like this, with his family back in Houston, getting surrounded by water.

“They were safe but scared. It’s not easy to ask your players, ‘Jose, now, go out and get your normal two and three hits. Be the 3-hole hitter. Play hard. And deliver us a win.’ And we did. We won a couple of games along that stretch. But if you want to humanize baseball, look at that story.”

Sylvester Turner, mayor of Houston, was adamant that a return by the Astros would be a big step toward a return to normalcy, so the Astros returned to Minute Maid Park two days after the side trip to St. Petersburg. Hinch addressed the fans before the first game back, saying, “Hello, Houston. It’s good to be home.”

After a torrid first half of the season, the Astros also had been in a funk on the field, with injuries to several pitchers and star shortstop Correa. But things started turning around even before the end of the homecoming series, just one week after Harvey.

That’s because Justin Verlander joined the Astros that weekend, acquired by the team from the Detroit Tigers seconds before the Aug. 31 trade deadline. Verlander’s presence boosted the Astros down the stretch as they recorded 101 regular-season wins, and he played a crucial role in the postseason with his ALCS MVP performance against the Yankees.

Verlander was the final piece for a team that had constructed baseball’s most dynamic core of young offensive talent. It was a piece the Astros needed, because the margin between them and the Dodgers was razor-thin.

“And that’s a good team over there. I don’t expect them to go anywhere anytime soon. I’d expect them to be competing for a world championship for years to come.”

The champion Astros began to form in 2010, when Jim Crane purchased the team from Drayton McLane and agreed to allow Major League Baseball to move the team to the American League West. Then Luhnow took over in 2011 and modernized the organization, while committing to a total rebuild from the bottom up.

Altuve was first called up to the majors in 2011 to join the first of those 100-loss teams. He, more than anyone, can appreciate how the Astros grew into champions.

By 2015, the Astros’ reconstruction efforts had them back in the postseason. But that run only added to a franchise legacy for postseason near misses — dating through the years of Nolan Ryan and Mike Scott in the 1980s and the Killer B’s era of Craig Biggio and Jeff Bagwell in the 1990s and early 2000s. The 2015 Astros’ five-game loss to the Kansas City Royals in the AL Division Series included a squandered 6-2 lead in Game 4.

“The baseball was important,” Hinch said. “We were chasing the pennant. This is a team that wanted to win the division. We’d been knocked out of the division a couple of years in a row. But we never lost perspective of what was important.

“I saw these guys at the community center the day off that the Mets gave us on Friday night [after our return to Houston]. I saw these guys do good deeds for people as they started to rebuild the city. And I think that’s why the city fell in love with this team all over again. That’s why we had that Houston Strong strength that carried us a long way.”

There were no shortcuts. There was plenty of pain, and maybe a few too many losses. But who could argue now whether it was worth it? Well, maybe a few Rangers fans, but that’s about it.

“This year in spring training I realized this is the team,” Altuve said. “It’s something in our clubhouse, a lot of chemistry, good relationships between players, coaches, with everybody. I was like, OK, I believed it was the year. Everybody did it, and now we’re here.”

This group has grown from historically bad to historically good. The city around the team has grown into the nation’s fourth largest and is projected to soon surpass Chicago for No. 3.

That weekend two months ago, when the Astros returned home, their downtown neighborhood looked no worse for the wear. The flooding had not been bad in that district, and there were only hints of storm damage here and there. But one thing served as a stark reminder that the city was in distress and that beyond downtown, many were suffering: There were almost no people around, save for those who had sought shelter at the local convention center.

The scene could not have been more different last week when Houston played host to Games 3, 4 and 5 — the last the classic 13-12 victory that cemented this World Series’ status as an all-timer. The streets were alive with orange-wearing fans.

A few days later, as the Astros celebrated in the bowels of Dodger Stadium, those streets remained alive.

And for the first time in the state of Texas, they are dancing to the beat of a brand-new baseball champion.